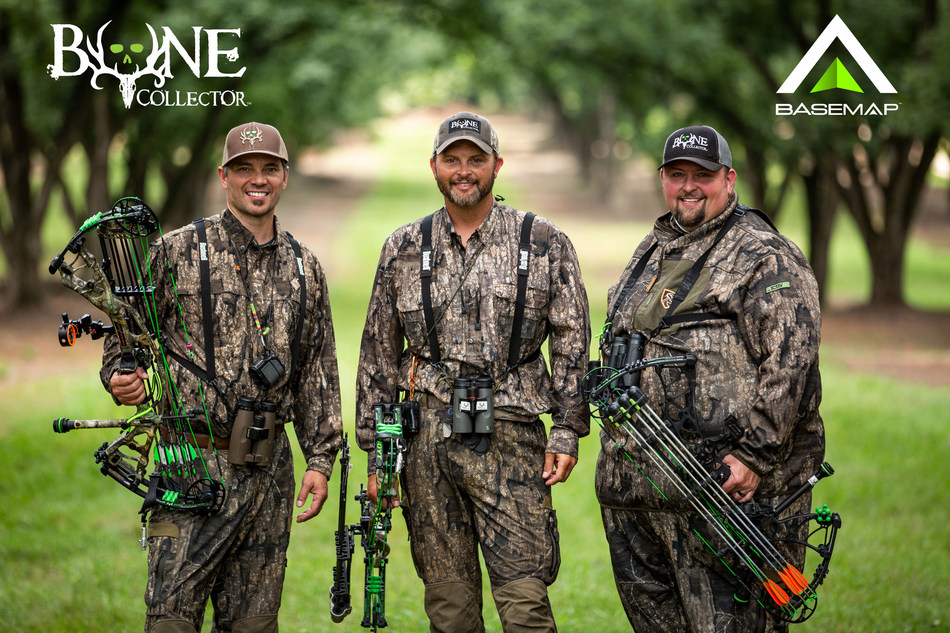 Since 2008, hunters have turned to Michael Waddell's Bone Collector™ as an authority on deer and turkey hunting, as well as a name that will stand up for the hunting culture. Now the Bone Collector crew is turning to BaseMap™ as the authority in hunting map technology.

BaseMap has been selected as the official hunting app of the Bone Collector team with an exclusive partnership, and will be featured across their social media pages, websites, and "Michael Waddell's Bone Collector" TV series, one of the top-rated shows on the Outdoor Channel and My Outdoor TV (MOTV). The Bone Collector brand represents the hunting culture and the brotherhood of sportsmen that have a true passion for wild game, the environment and the outdoor lifestyle—and BaseMap provides the tool that helps people spend more time outdoors in a productive and safe way.

The Bone Collector team—Michael Waddell, Nick Mundt, and Travis "T-Bone" Turner—have been using BaseMap and found the map quality and the variety of layers to be a great help for their outdoor activities. Now, their audiences and followers will get an up-close and in-depth look at the features and benefits of the app and how it can be used in all aspects of hunting and outdoor life including pre-season scouting, land management, the pursuit of game and more.

"The Bone Collector team has been an inspiration to many hunters to say the least. I remember watching Michael Waddell when Realtree Roadtrips first aired thinking 'that's the ultimate dream job,'" says BaseMap Founder and CEO Jeff Balch. "They have such a positive influence on the hunting industry and have inspired many hunters to pursue careers in the outdoors… me being one of them. I'm honored and thrilled they have chosen BaseMap as their go-to hunting app and excited for big things to come with the Bone Collector team."

"I've tried so many scouting apps over the years, and BaseMap has become my go-to," says Michael Waddell, Founder of Bone Collector. "Preparation leads to success and it's better to measure twice and cut once! Same goes into scouting. It's just something you can't overlook. BaseMap is dependable, accurate, and has a full suite of tools, and a cool 'SmartMarkers' feature, that really sets it apart. You can even use it if you have no service. Behind the scenes, the team at BaseMap wants to empower outdoorsmen and women to spend more time outside doing what they love, and that's something we can stand behind!"

Members of the Bone Collector team will be making appearances at trade shows and other events with BaseMap throughout the year, interacting with fans and promoting the app and partnership.

"We are excited to be a part of the BaseMap Team! The technology in the BaseMap app makes life in the field easier to navigate and allows us to take full advantage of the information at our fingertips," says Bone Collector Nick Mundt. "We are excited to share this new amazing tool with our audience and the hunting world!!"

The Bone Collector partnership comes on the heels of a series of new announcements from BaseMap including new feature releases, weekly product giveaways with GearDrop™, key industry partnerships, and strong organic growth for the BaseMap product. BaseMap recently affirmed their commitment to wildlife conservation by becoming a member of the organization "2% for Conservation."