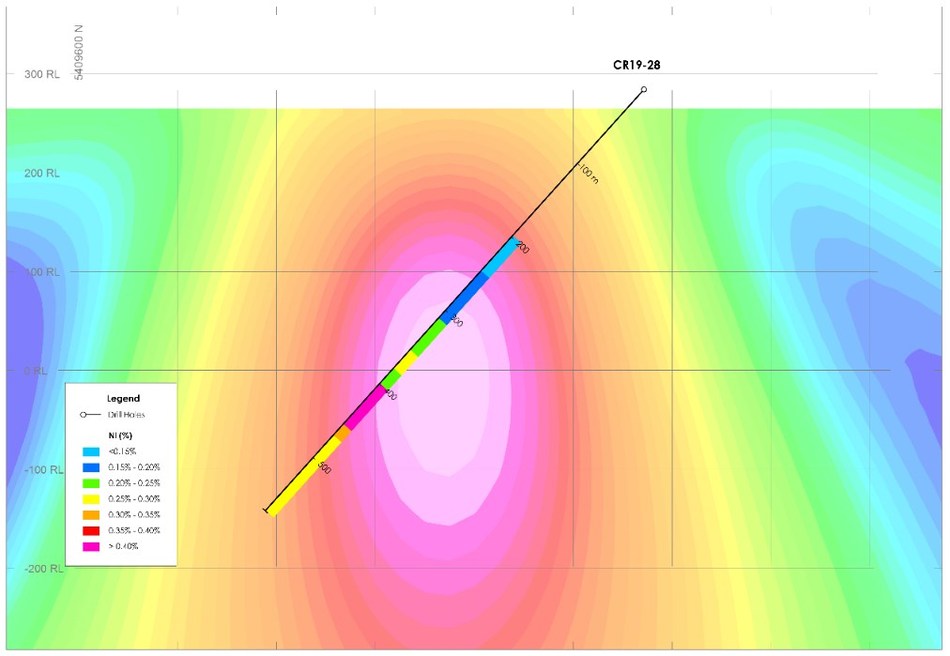 Canada Nickel Company Inc.("Canada Nickel" or the "Company") has announced the results from the latest drill holes at its Crawford Nickel-Cobalt project, including the first two discovery holes on the East Zone, and partial assays from a third hole which is a 1.5 km extension to the PGM Zone on the Main Zone.  The new East Zone discovery has only been tested for 1.7 km of its overall 2.6 km interpreted strike length and the original Main Zone remains open to the west and at depth.

Mark Selby, Chair and CEO of Canada Nickel commented "We are very pleased with both the new nickel and multi-zone palladium-platinum discoveries from our first step-out holes at Crawford.  These new holes have also yielded both the most promising palladium + platinum (2.6 g/t across 7.5 m) intersection and highest grade nickel zone intersections to date (0.42% nickel + 0.2 g/t palladium + platinum across 55 m).  With more than 1.5 km extensions to both the PGM Zone and Nickel Zones and assays pending from another 9 holes which have the potential to further extend the mineralization identified to date, we look forward to continued success as we unlock more targets at our original Crawford property. With the additional properties in the process of being acquired from Noble, we have added a number of nearby targets which we will begin exploring later in the year initially utilizing geophysics to determine the highest priority (based on potential for higher grade mineralization) targets."

Mr. Selby continued "We continue to be encouraged by the results of our drilling program and are committed to establishing Crawford as one of the leading next generation nickel-cobalt sulphide and palladium projects. I extend my sincere thanks to our exploration team for their hard work and the ongoing support we've received from our local contractors including our drilling company NPLH. Our top priority is the safety and wellbeing of our people especially during these challenging times."

The Crawford Nickel-Cobalt Sulphide Project is located in the heart of the prolific Timmins-Cochrane mining camp in Ontario, Canada, and is adjacent to well-established, major infrastructure associated with over 100 years of regional mining activity.

The first two holes of this next phase of exploration drilling (CR19-28 and CR19-31) were drilled along the East Zone, doubling the known total extent of nickel mineralization by 1.7 km to a total of 3.4 km.  Both holes intersected large widths of nickel mineralization of 321 metres and 382 metres respectively, with hole CR19-28 ending in mineralization at 573 m.  Hole CR19-28 yielded the highest grade nickel interval to date – 55 m of 0.42% nickel and 0.2 g/t palladium + platinum within 256 m of 0.30% nickel and 0.05 g/t palladium + platinum within a total of 0.27% nickel across 321 m.  A further 9 holes have been drilled on the East Zone which have assays pending.  See Figures 1a, 1b and Table 1 for drilling results.

The third hole (CR20-32 - only partial assay results were available) was positioned at the northeastern end of the Main Zone, approximately 1.5 km from the nearest previous hole and intersected three separate palladium-platinum zones including the most promising palladium-platinum results to date: 2.6 g/t palladium + platinum (1.3 g/t Pd, 1.3 g/t Pt) over 7.5 m within 1.8 g/t (0.9 g/t Pd, 0.9 g/t Pt) over 12 m from 123 metres. See Figure 2 and Table 2 for summary of the PGM results.  Each of the intersections was at a peridotite-pyroxenite boundary which has now been intersected multiple times.